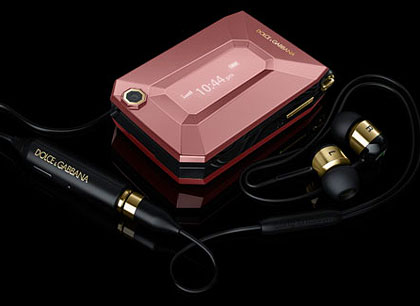 Out goes Motorola (thank goodness!) and in comes Sony Ericsson...Dolce and Gabbana have found a new collaborator and have released a sexy little phone based on Sony Ericsson's Jalou design. A short film has also been created specially for the phone and directed by film director Cyril Guyot.

“The film is about bad girls desiring an object more than anything, and we felt this was the best way to reflect the key qualities of Jalou by Dolce&Gabbana." explains Mr Guyot.

The short movie is a treat to watch. The set is beautiful and the mood intriguing, with a somewhat reference to film noir. I love the clothes on the models. The gloves head gear is so interesting, silly but fresh and eye catching in a way:-P

I am now very skeptical about fashion phones. Often than not, they are big on glamour and aesthetic appeal but low on functionality and technology. The new Jalou by Dolce & Gabbana is all hyped up to be an 'IT' gadget for fashion forward ladies and boys with a rose-coloured body and 24-carat gold plating....but to me it's just a makeover for an exisiting Sony Ericsson phone, just branded with a luxury name and selling for a bigger price tag. Why didn't Dolce & Gabbana reinvent a phone design entirely? Isn't it better than just an upgrade of an exisiting design?

Nonetheless, let's hope the new Jalou delivers more punch than it's Motorola predecessor! That DG/Motorola phone is so 'primitive', the user interface brings me flashback of the 80's:-P (But I do love the gold, it's so bling and cool.)

Features of the Jalou include a 3.2 megapixel camera, mirror key and music player.

Enjoy the clip! The new Jalou by Dolce & Gabbana: A yay or nay for you?