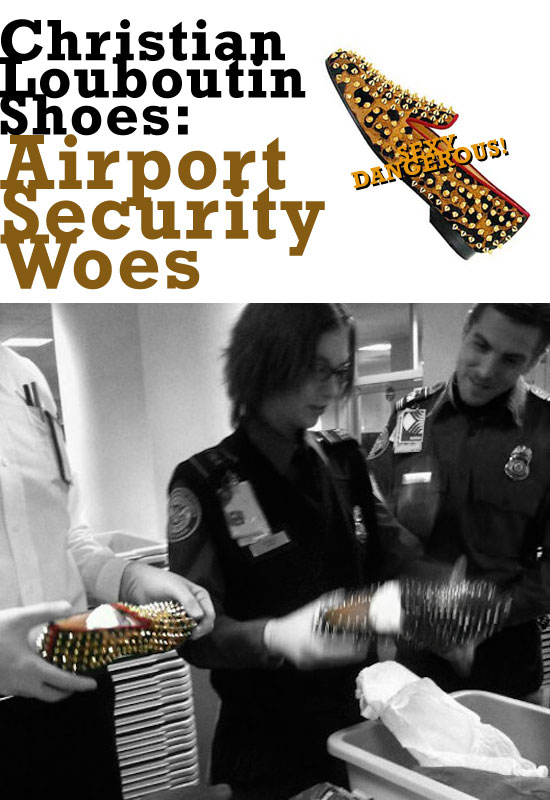 A week ago, before I embark on my new year's holiday to Bangkok, I was asking on my facebook if I will run into any problems with airport security wearing my Christian Louboutin Studded Freddy Flats. Guess what, my fears were not unfounded... it seemed someone in the USA did have a close encounter with the airport securities with these famed and sexy dangerous footwear. Here's the article as featured on this site:

We have heard of TSA officials giving grief to passengers passing through security with spiked Christian Louboutin sneakers in the past, but thankfully tAz Arnold aka ti$a took a quick pic to document the harassment. According to tAz, TSA officials attempted to confiscate his $1245 Christian Louboutin Rollerboy Spikes citing that they appeared to be “weapons.” We checked the TSA regulations website an apparently you can get away with metal scissors, hand tools including screw drivers if less than 7″ in length, but apparently 1/4 long “spikes” with dulled tips spaced evenly across a shoe is a problem.

Thankfully ti$a and his $1200+ shoes did make it through but be warned that the next time you go through security, TSA may be out to take away your dignity and your shoes.

TI$A, next time we suggest you rock your collab kicks you did with Stamp’d LA and check the Christian L’s.

Take a vote: Is Christian Louboutin's Studded Footwear posing a 'threat' to air travel security or no? Will you still wear your Freddys or Rollerboys on your next flight? Comments please:-)

Spikes are in plastic and not metal !!!

The TSA is so dumb. The CL studs are made of plastic!

NO I don't think it's a threat. Who in the right mind would hum tum someone with a pair of shoes that cost around 2 grand?. An almost similar incident occurred to me when my Alexander McQueen knuckle ring was shipped to me from London. The Police confiscated it and called me in to take a statement, citing that I am importing in a dangerous weapon. Thankfully, the situation was diffused quickly and the misunderstanding was cleared up.

i was soooo afraid of just that, i got my C.L. in LA but i didnt have any issue with security at the airport or anything what so ever, but i was ready to make a scene if TSA said something about my beloved shoes

If CL flat considers a weapon, so do other stilettos... This incident was ridiculous !

just check it in, I'm sure it's not comfy to wear it for long haul flights anyway

stilettos pose bigger threat than flats . hell yeay i will make a scene if such things happen to me or my CL . i dont pay 2k for nothing . but just to play safe ill stick to studs free shoes at the airport .hahaha

Really...I got my CL Freddy flat from CL Miami and I don't think my spike is plastic...especially when two shoes hit each other while I am walking...it felt or sound like metal each each other...so are you sure spike is in plastic??? anyway I would put my in luggage instead of wearing it for the flight!!