Below: Vlieger and Vandam's Guardian Angel collection of bags features some amazing leather clutches with dangerous designs... anyone dare to carry this pistol embossed clutch bag to the bank?:-P 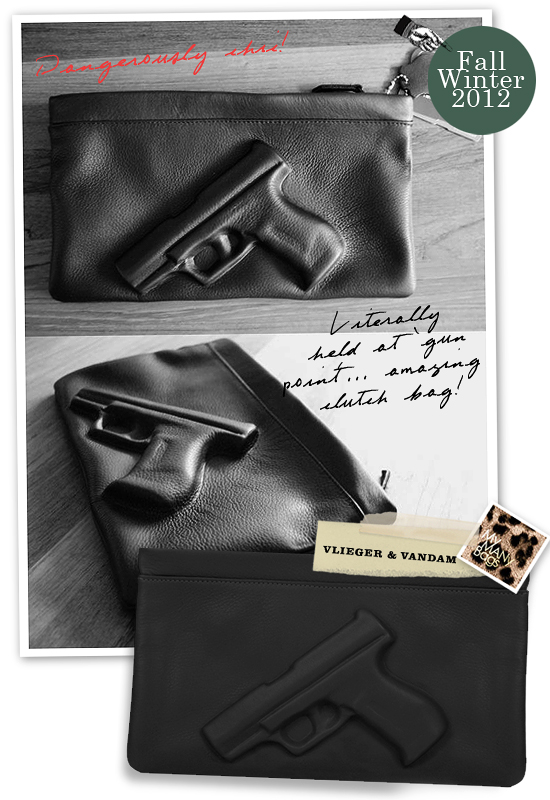 Below: The clutches from Vlieger and Vandam's Guardian Angels collection are my favourites. They even feature hand cuffs, knife beside the pistol design... fashion becomes dangerous! 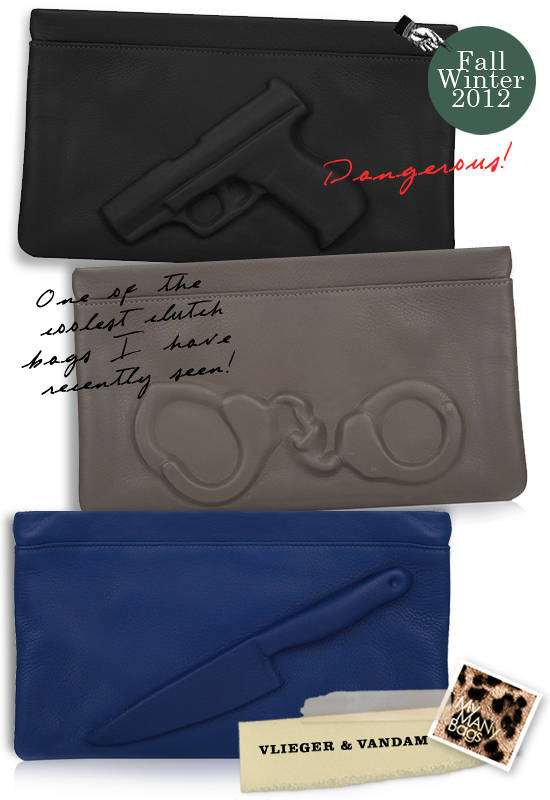 I am not one who will propagate violence. However, these Vlieger and Vandam 'Guardian Angel' clutch bags immediately made me look twice when I first lay eyes on them. Bordering on triggering any security alarm or becoming a statement making expression of style... I think they achieved both.

Why would I say that? In 2002, Dutch design couple Carolien Vlieger and Hein van Dam created the ultimate accessory line of bags, clutches and tech accessories named 'Guardian Angel' where danger becomes chic. Featuring a pistol, knife and handcuff in 3 dimensional leather embossing, the collection was an instant hit which also created lots of controversy. Imagine carrying one of these bags to board a plane, or simply walk on the streets, they could create some serious 'panic':-P

So 'dangerously' engaging are the couple's creations that MoMA (Museum of Modern Art in New York) had to include their work in the ‘Safe Design Takes On Risk’ exhibition. Subsequently Vlieger & Vandam bags are being exhibited worldwide and are part of the permanent collections in the Museum of Modern Art in New York, the Design Museum in Helsinki and the Museum of Bags and Purses in Amsterdam (which is actually just around the corner from their studio).

The tags that came with the bag also has an advisory for new owners not to bring the bag aboard a flight or go to the bank. Fashion accessories takes on a new meaning. One that either you love or hate.

For me, I love the boldness of the concept. It may trigger debate over the propagation of violence, but if you take it at a pure fashion value, these bags are a real eye turner. I am all for the clutches as shown above!

Accept it or frown upon it... take your stand. The clutch bags retails for Euro 182 at Luisaviaroma.com and the full collection can be purchased at Vlieger & Vandam's website.