Labels: Loewe, Men's Fashion, My MANy Bags Trendspotting, Pre Spring 2015, Shoes, The Material Boy
Below: More quirky, indifferent designs from J.W. Anderson's Loewe collection... This time I love the Meccano inspired (A type of construction toy kit from yesteryear) black oxfords where a conventional mens shoe design gets a makeover with colour and personality! Love the detachable cut-out leather piece that gives the shoe their uniqueness:-) (Streetstyle pic from Style.com) 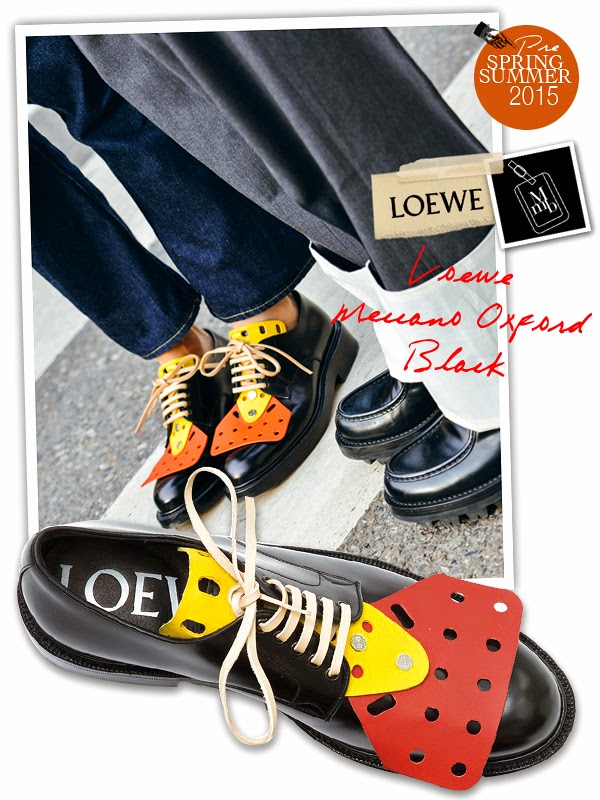 Below: Featured on the SS2015 lookbook and injects a youthful cool to the model's look... 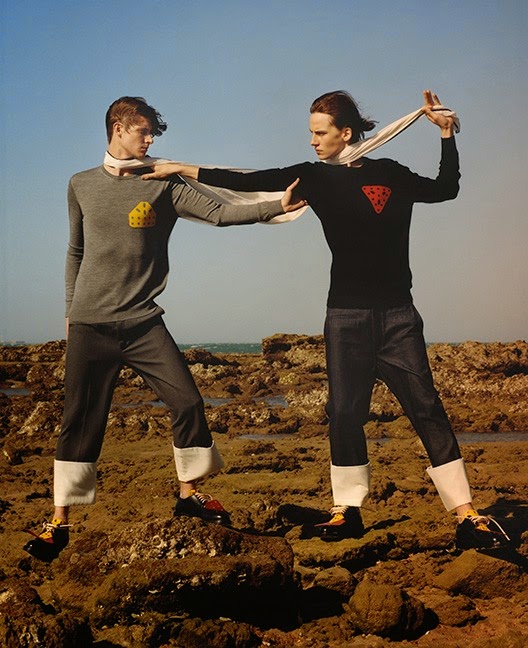 JW Anderson’s debut Spring Summer 2015 Mens Collection for Loewe has been highly anticipated by many in the fashion industry. Taking the Spanish luxury label to a refreshed and younger era, the collection is filled with many avant garde accessories that speaks volumes of Anderson’s highly original and androgynous style.

Part of the  pre-launch collection for JW Anderson’s Loewe collection, the Meccano inspired (a toy model construction system conceived by Frank Hornby in 1898) range of accessories evoke a sense of naivety and graphic children’s toys. One of my favourite piece from the collection is the Meccano Black Oxford (SGD1390) which feature a detachable multi-colour decorative leather ‘tongue’ that adds colour and interesting graphic detail against the all black leather. Cream coloured leather laces provides another layer of contrast and the final composition is one that is refreshingly quirky. Holds true to the collection’s concept of hyper-normality: Realistic, functional and utterly desirable. A simple black conventional oxford transformed and modernised.

Check out the streetstyle pic above of this guy from Milan Mens Fashion Week (FW2015) spotting the exact same pair... I love all those yellows and coral reds from the graphic cutouts making the shoe charmingly cute. Perfect to go with denim or knitwear as shown in Loewe’s SS2015 ad campaign. J.W. Anderson is definitely on the right track to inject newness to the brand. I’d wear these in a heartbeat!


Below: The Loewe Meccano inspired collection of accessories with fun charms and brooches... 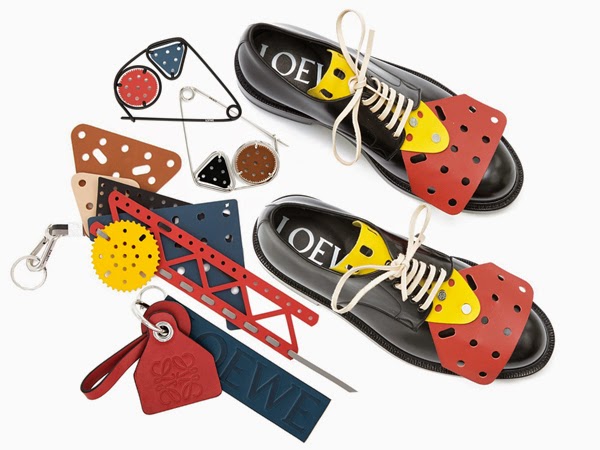 I really like the shoes. They're what I expect from JW. For his namesake brand he really pushes the boundaries. Its interesting to see his aesthetic translate to a luxury fashion house. So far so good.