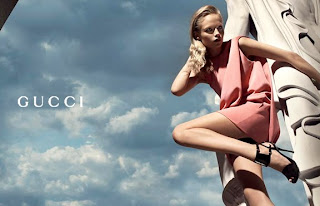 Gucci - The Most Coveted Designer Brand In The World

Check out this article. Got this from the website of International Herald Tribune. (Click on the link to find the source article. But I have extracted the report and post it here:-)

The Gucci fashion label is the most coveted designer brand in the world, according to a survey by market research firm The Nielsen Company. One in five consumers said that they would buy Gucci products if money weren't an issue, according to a survey of 25,000 online consumers in more than 48 countries that was conducted by The Nielsen Company and obtained by Bloomberg News. In a similar survey published two years ago, Gucci shared the No. 1 spot with the Italian fashion label Giorgio Armani, which has since slipped to the No. 4 spot in the current global survey, Nielsen said.

"In the past two years, Gucci has managed to maintain and even increase its brand equity in a very competitive and fickle industry," said Patrick Dodd, Nielsen's president of Europe in a statement. "They have achieved this by consistently embedding their core brand values in all their branded products, which range from perfume and sunglasses to accessories, jewelry, handbags and ready-to-wear."

Gucci, which is owned by the French retail company PPR, was turned around in the mid-1990s by former executives Tom Ford and Domenico De Sole, who made its bamboo-handled bags, horse-bit motifs and double-G logos trendy and profitable. The brand's current chief executive, Mark Lee, is working with its creative director, Frida Giannini, to revive other iconic symbols including a family crest and a script logo on handbags and other accessories.

Some of the strongest responses came from India and the United Arab Emirates, where 41 percent and 37 percent of consumers, respectively, said they would choose Gucci rather than 24 other labels and designers from their own country.

Consumers in North America were the least interested in luxury brands, with 35 percent saying they would not buy any luxury brands even if money were no object.

The Nielsen survey was conducted in November and polled purchasing behavior and future aspirations of online consumers in Europe, Asia-Pacific, the United Arab Emirates, North and Latin America. Consumers were asked which designer labels they already owned and which they would buy if money were no object.

The survey has a margin of error of 3 percentage points, Nielsen said. It was conducted among a sample of Internet users in each country that are representative of the online population.
Posted by Kevin @ myMANybags at 3/27/2008

Strangely Prada didn't make it to the list in the cited article. I wonder why? hmmm all the more better for Prada maniacs like me. Keeps the brand exclusive and personal. Ha Ha ..eluding myself.

yeah, I was also surprised Prada is not on the list. maybe at a lower ranking. the article only feature the top few brands. But gucci wins the survey becos of the entry level monogram fabric bags and the tacky cheaper range of merchandise. I only like the runway collections which are often more exclusive and pricey. Prada is a good brand, but some of the men's collections are too unwearable...surprisingly, this seasons short sleeve shirts with check patterns are very wearable!