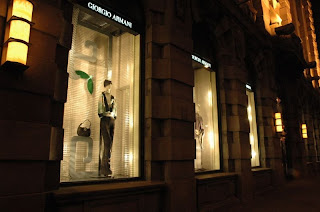 TOKYO - Years ago, when the first Armani boutiques opened in China, a furious customer walked into one of the shops, brandishing two Armani T-shirts.

He wanted to know why one of them, the one he had bought in the shop, was labeled "made in China," while the other, the cheaper T-shirt, said "made in Italy."

The second T-shirt was, of course, a fake. So was the "made in Italy" claim; Armani T-shirts are no longer produced there.

These days, many fashionistas are still confused over what is real, what is fake, and whether a product's country of origin says anything about its quality.

Even a "made in Italy" label no longer guarantees that a bag or a pair of shoes was hand crafted by artisans in a Tuscan workshop. Instead, the bag could have been stitched together by illegal workers in clandestine Italian factories, and the shoes assembled from plastic soles and leather shipped in from China.

And yet, Asian manufacturing remains a taboo in the luxury sector where image is everything.

Faced with shoppers' concerns about product quality, environmental standards and working conditions in Asia, many European luxury goods makers swear that their factories will always stay close to home.

But some are going on the offensive, arguing that new manufacturing sites can actually boost quality and creativity.

"At the end of the day, we are talking about perception. There is no reason why you can't make good things anywhere in the world, as long as you have the artisans and attention to quality," said John Hooks, deputy managing director at Giorgio Armani.

Hooks is passionate about the opportunities that a global manufacturing base offers.

Lower labor costs in Asia allow designers to spend more on expensive fabrics and elaborate techniques than in Europe, he says, and therefore the final product could actually be more sophisticated than one that was manufactured in a high-wage country.

"If we are obsessed with made in Italy, made in France, the negative side is that everything gets pared down to essentials," he told Reuters. "There comes a point where this slavish respect for 'made in Italy' cannot hold unless the product becomes extremely expensive."

He also points out that in the right context, African or Asian manufacturing can be seen as a bonus: Armani, for example, is studying the production of Emporio Armani RED goods in some African countries as part of a campaign across a range of consumer goods to fund treatment for AIDS patients.

With their rich cultural heritage and a history of producing silks and embroidered textiles, China, India and other Asian countries should in theory be well placed as manufacturers of luxurious clothes and accessories.

Japan, for one, already outshines Europe as a specialist for certain accessories and fabrics, especially expensive denim. Eyewear maker Luxottica, which makes Prada and Chanel sunglasses, has a factory in Japan that produces exclusive gold-rimmed glasses for the highly selective Japanese market.

Many consumers, however, would prefer not to discover a "made in China" tag on a $1,000 dress.

Asian shoppers are particularly origin-conscious as French and Italian luxury goods are important status symbols in the newly affluent region. And the opinions of Asian shoppers are beginning to matter more and more as growth in more mature markets slows down.

"In Asia, in a certain segment, you can't offer a product made in China or made in Asia," said Patrizio di Marco, president and chief executive of Bottega Veneta, on the sidelines of a luxury goods conference in Tokyo. (More to follow, for full article click here.)

Honestly, the only consolation and difference that I have and want in my good which I don't mind paying more for is the location of the country.

I mean, Coach is Made In China but I won't mind spending so much more on my Paul Smith's stuff which is still Made in London

I think in Asia, we all have a very strong perception that asian made goods are less quality controlled than european made ones. Perhaps we have all heard horror stories of asian quality. In a way, we are descriminating against our own people. But the concept of fashion and luxury goods are based strongly in western culture, hence, things from their origin is always perceived as the better, and henceforth, higher value.

I do mind paying huge amounts of money for china made goods. US brands are more prone to their line made in China. First line Italian brands are usually made in Europe. Except for 2nd line and below.

It's not so much the perception, if I am already paying a fortune, it might as well be worth it. For eg, the setup and the manpower to manufacture a bag in Europe (minus Portugal & Spain) probably take a whole chunk of the cost.

I am very skeptical about the claims on how company set up factory in China to lower down the manpower cost and spend more on the materials. It's just common sense to have a higher profit margin.