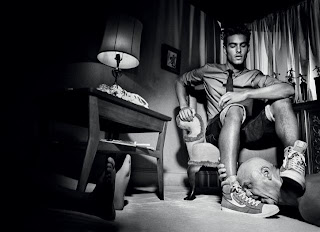 Tom Ford did a series of amazing, provocative ads featuring fetishes and nudity (male!) for his menswear. Seems Diesel is following in 'his footsteps' with their new Spring Summer 2009 ad campaigns.

What do you guys think? Better or for worse? Creativity or copycat? They even used the same model as Tom Ford's campaign. To be honest, without reading WWD's synopsis of the ad, I did not get it. All I see is the cute Jon Kortajarena putting his foot on that old man, as if he has finished beating him up.:-) Well, that's me.

Well, for starters the feel of provocation comes not only from the subject matter but from the as a matter of fact feel that is signature of Terry Richardson who shot Tom's ad.

i still think when it comes to sex, Tom Ford still does it with more taste than most.

you are already very drool worthy:-) So no need to be envious of him. hehe.

And Mr Duck, yes, Mr Ford is all about sex. It's his signature.

So nice of tou ;P I just hope that you will like my campaign that I'm going to starr in next year ;P

Hey Paolo:-) Please do update us when the campaign rolls out next year:-) can't wait! So cool. You are going to be a star:-P Congrats.

I liked that Kris van Assche campaign better. Is that related? Hahaha. I'm so ignorant in fashion.