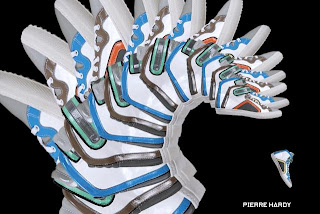 It is the time of the year again! Pierre Hardy has been releasing his limited edition Colorama sneakers for the past 2 years, usually happening end of each year. This year, he is doing something I can forsee myself wearing! Presenting the new Pierre Hardy Colorama 3 Limited Edition Sneakers. Only 500 pairs are made and only sold in a selection of the very best stores worldwide. Fortunately, Club 21 mens is one of them! A white based design with multi colour blocking and trimmings effect . Not as loud as the previous versions but definitely more tastefully done and easy to match an outfit.

So many things to buy, so little money!

Kevin...wonder when the shoes would be stock in......i really hope to get them.

you can try asking Club 21 this weekend. supposedly they are to be released in Dec.:-) Good luck!

P76, did you happen to check out the price as well?

These should be SGD $819, as per past years. Call or visit club 21:-) It's already on the racks. In patent leather. I was too busy buying sale shoes so did not even attempt to try this. This is non sale item.:-P

Anyway, I still prefer the colorama 2... and I'm glad that I scored a pair. Heehee. :D

Good for you to get the colourama 2 shoes.

Go check out this latest version!