My MANy Bags Lookbook #14 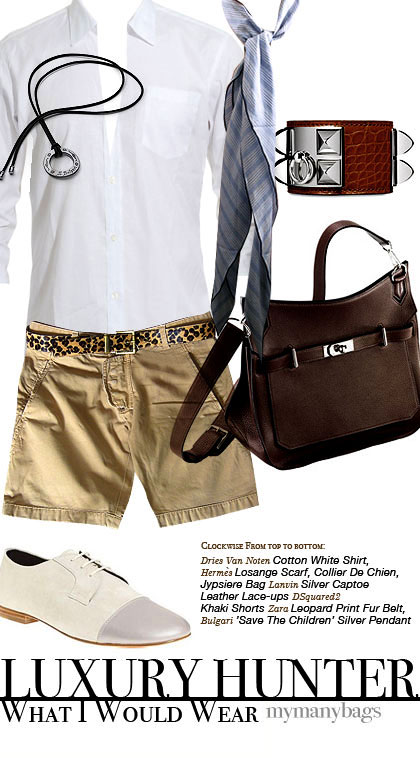 Inspired my newly acquired Zara leopard print belt, I had an idea to create a safari style look for a gentlemen into 'hunting' for all forms of luxuries in life:-P He is the Luxury Hunter. Well travelled, nonchalant, he travels through the safaris of Africa and feels as comfortable in the urban jungles of New York City. Never losing sight of his apreciation of finer things in life as he explored both the rugged and man-made terrains of the world.

Decadent casual looks...mix of luxurious and outdoor 'roughing it out' styles. He wears his Dries Van Noten Cotton White Shirt open collar and sleeves rolled up. He prefers his Dsquared2 Khaki shorts to tailored pants. And he adorns his waist with an eye catching Zara Leopard Print Fur Belt, his neck with Bulgari's 'Save The Children' Silver Pendant, while wearing his Lanvin Silver Captoe Lace-ups. On the luxurious end, he enjoys the company of his cosy Hermès Cotton Losange Stripe Scarf and flaunts his Crocodile Skin Collier De Chien bracelet. His sac of choice? None other than the unisex and interesting looking Hermès Jypsiere Leather Sling bag. He is definitely not afraid to show off his luxurious acquisitions or brave the harsh wrath of nature:-P

Love the look! Classy, understated yet luxurious with a subtle streak of adventure. One of your best to date. :)

Thanks Mervyn! BTW, I caught a glimpse of your backview last evening as you went up the escalator at Ion. Too late for me to say hi...

and Sean, yes the snood is too hot for tropical weather. If not I would have gotten it. and glad you like this outift:-)

I'm getting that snood, thanks to you. You have an amazing power of persuasion.

I forgot her name but there's a mutant in X-men who is like that. She's the wife of Wolverine, and has a sister who turns into diamonds. LOL

The shoes are great.

Love the collier de chien. Has it been to your style arsenal yet? Otherwise i think this outfit looks more 'Urban Safari Chic' Than 'Luxury Hunter.'

Oh Allan, I remember the Diamond chick:-P I dunno her name. But I think she was a character created for the movie... have never heard of that character in the comics before:-P But I am outdated with regards to Xmen now.

And Paolo, I love those 2 tone lanvin shoes too!

And gregory, collier de chien is a current obsession:-) not acquired yet:-)