My MANy Bags Trendspotting #184

Below: I am now obsessed about Prada's Fall Winter 2010 Camouflage Print Briefcase with a shoulder strap. I wonder if I am too late to track one down! Looked fantastic against suiting style, as modelled by David Thielebeule (Accessories Director of Allure) ... 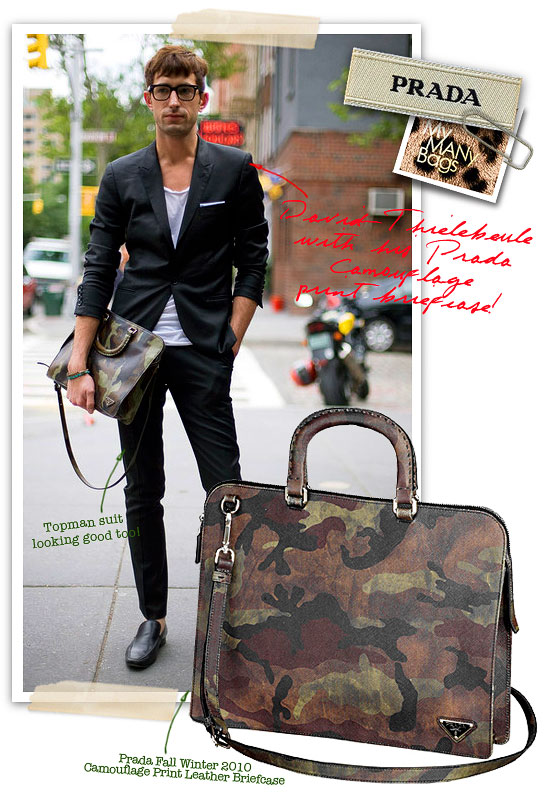 I was never a fan of Prada's Camouflage range of mens leather bags when it launched in Fall Winter 2010.

But today, upon seeing David Thielebeule (Accessories Director of Allure) holding one while dressed in his immaculate suiting style. The Prada Camouflage Print Briefcase (USD1685) gives an interesting hard edge to the sleek black Topman suit he is wearing. Opposing themes create the most interesting looks.

LOVE! I am now inspired and obsessed. Wonder if I am too late to track one down...

I love the camouflage print in leather (no overpriced nylon please)....but the ugly Prada triangle is a big blemish on the overall design. Sigh.....can't they ever do anything subtle :(

Need to check with you something.

If I buy bags over SGD$1000 online, will our custom charge me any taxes?

SG tax rules is that all purchases over SGD400 is subject to 7% GST.

So that applies to incoming purchases on your overseas online orders.

Kevin thanks for the quick reply.

Is the 7% GST included in the invoice charged by the overseas online store or do I need to make a separate payment of the taxes upon arrival of the product in singapore?