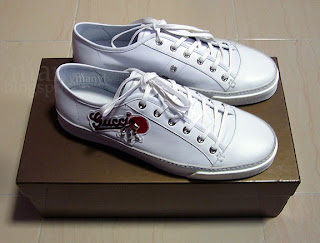 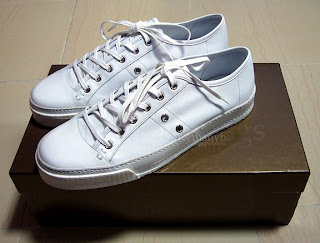 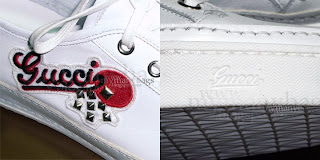 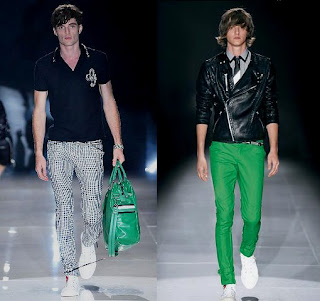 I know this pair of shoe is not well received by a lot of people. To a lot of people, it may seem like a cheap knock off you find in China. But to be honest, yes, although it is a plain pair of white sneakers, nothing outstanding in terms of design, the leather used in the shoe is one of the softest I ever experienced and I really really like the studs and Gucci script embroidery. Hehe. It seems sometimes I fall for things which can be 'tacky' and decadent. It just feels great to own a piece of extravagance.:-) I love the rocker chic from the studs and the Gucci script ensures no missing out on the Gucci brand. I also like the basic style which makes the shoe easy to match any type of outfit. Plus, the high cut version of this pair of sneakers is widely featured in magazines which somehow 'brainwashed' me to fall in love:-P

One drawback though about the shoe, is the Gucci Script embroidery is only on the right shoe. The left side only has plain white leather with open studs. I was initially skeptical about the shoe after trying it yesterday. Cos' I feel it looks too plain on the left side. But after much thought, I decided I still like it and hence I went ahead with my purchase. Plus, Gucci Singapore marked up the prices so much, it was almost SGD $200 more than what Saks (in U.S.) charges. It was USD $550(around SGD $760)...but in Singapore, it is close to SGD $1000! Thank goodness I got it during sale and at 30% discount.

Well, too late for regrets now. I love the shoe:-) which is most important. Looks great with shorts or skinny pants/jeans!

1000 for this?? Gosh that's such an insult to cosumerism.

Pardon me as i speak for myself and only myself....it's tacky and quite frankly looks cheap. Thus ups the irony quotient when it cost's a whooping 1k.

it costs SGD $960 original price..hence the extravagance and decadent factor...which sometimes I like. I can be shallow at times. hehe. But I like the shoe nonetheless.:-P

YES I WAS APPALLED. I asked the SA how could they? hahah
I hadn't even broken mine in...and it's already in the half-off bin.

But i got myself a real deal today...a pair of dress shoes at 45% ...so that kindda appeased me.

Yeah, It's horrid. At least my Pierre Hardy Open toe shoe is sold out at Club 21 and never had a chance to go on sale there. But this prada shoe with all the hype...goes half price so soon. Yeeks!

And same here, have not even worn them yet. But a comforting thought...we would not have gotten the colour we want at size we can wear during sale. The brown pair displayed on the marked down shelf was size 8.