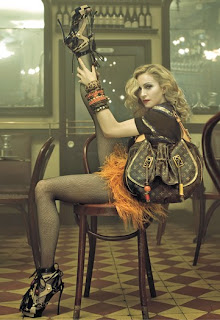 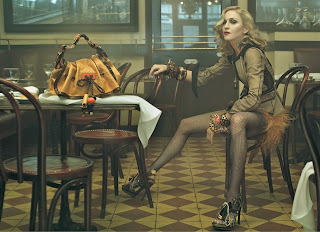 At 50 years old, I am amazed at Madonna. She does not look her age at all. Especially since she can raised her legs up so high in this latest photoshoot for Louis Vuitton's Spring Summer 2009 advertising campaign. Apparently, Marc Jacobs was inspired by Madonna's concert the night before and during the brainstorming session for Spring Summer 2009 ad campaign ideas, he suggested they shoot Madonna!

That is how this 'evergreen' music icon became the next spokesperson for the venerable french luxury brand. Shot in a french restaurant, Figaro in LA, Marc was impressed with Madonna's fitness, posing in difficult positions such as her legs high up. A person half her age might not be able to do half of what she did! Amazing, I am in awe as well when I saw that shot. She is old enough to be a grandma and yet this woman can 'kick'! Fierce! (Quoting from that funky hair guy from Project Runway:-P)

I love the look and feel of the campaign. Steven Meisel delivers yet again. I see it becoming my favourite for next season.:-P Looking to see the full range of ads.

She is H-O-T.
Great Ad. old western style, Great job on the handbag.