Below: Angelina Jolie is the latest celebrity to be featured in Louis Vuitton's Core Values Ad Campaign. Shot in Cambodia by Annie Leibovitz (Click on image to enlarge for better view) 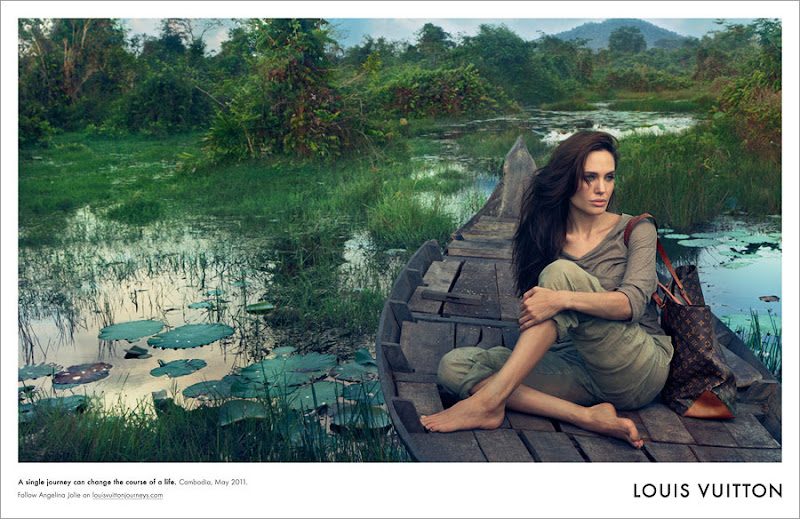 "We are honoured that Angelina Jolie agreed to participate in our Core Values campaign, whose central theme of travel as both a physical and emotional journey is one with which she can personally identify. Angelina Jolie is a global star in every sense – not only in her career as an actress, but also in her long-term commitment to international humanitarian issues." Pietro Beccari, Louis Vuitton Executive Vice President, Marketing and Communications

Angelina Jolie is a global star in every sense – not only in her career as an actress, but also in her long-term commitment to international humanitarian issues. Someone who truly inspires.

The Core Values campaign pictures Angelina Jolie sitting barefoot in a traditional wooden boat in the luxuriant, watery landscape of Siem Reap province. Next to her is a vintage Louis Vuitton Alto holdall in Monogram canvas, a bag the actress has owned and loved for many years. The tagline reads: "A single journey can change the course of a life. Cambodia, May 2011."

Having described her first encounter with Cambodia as a life-changing experience, Angelina Jolie agreed to be photographed there for Louis Vuitton.

Cambodia and Angelina Jolie shares close emotional ties. She travelled there for the first time in 2000 to film Lara Croft: Tomb Raider, and was overwhelmed by the beauty of its landscapes and the warmth and generosity of its people.

She returned to Cambodia in her role as a United Nations High Commissioner for Refugees Goodwill Ambassador, raising awareness of the dangers of landmines, and subsequently adopted her eldest son Maddox from a Cambodian orphanage. In 2005, she was awarded Cambodian citizenship by King Norodom Sihamoni for her humanitarian and conservation work in the country through the Maddox Jolie-Pitt Foundation, which she established in 2003.

Keep a look out for ad in international magazines from Mid June. Keep on the good charity work, Mrs Pitt!

i dont blame her. Siem Reap is beautiful!!!