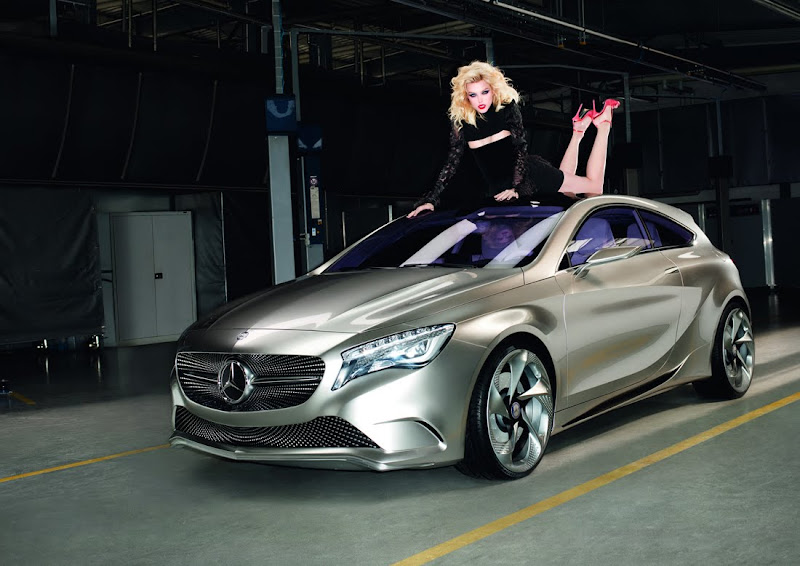 Below: Check out the video and behind the scenes for this new Ad Campaign!

Mercedes Benz has long been a supporter and collaborator for fashion. Not only are they the partner for numerous Fashion Weeks worldwide (New York and Berlin to name a few) , but now, they have even engaged Fashion world's top photographer, model and designer to create their Spring Summer 2012 ad campaign.

The Concept A-CLASS show car embodies the vision of the next generation of Mercedes-Benz. To celebrate, photographer Terry Richardson has turned the spotlight on the Concept A-CLASS, creating a picture of seduction that is truly breathtaking. Top model Jessica Stam poses on the roof, lending a further dimension to the tremendous dynamism of the Concept A-CLASS. The stunning black dress with lace sleeves, a daring cut-out on the neckline and details made from feathers is a creation by Giles Deacon for Emanuel Ungaro.

Anders Sundt Jensen, Vice President Brand Communications Mercedes-Benz Cars says of the campaign:
“We came up with the theme of ‘accelerate the pulse’ for Mercedes-Benz’s Spring/Summer 2012 fashion commitment; Terry Richardson has created a truly successful reflection of this with his motif. It symbolises passion and extrovertness and portrays the Mercedes-Benz Concept A-CLASS as the first vision of a young and progressive generation. For the implementation of the key visual, we deliberately chose protagonists that have a similar strength of character and individualism as the Mercedes-Benz Concept A-CLASS. Photographer Terry Richardson, model Jessica Stam and designer Giles Deacon are successful modern artists from whom we’ll be hearing much more in the future too.”

I feel the release of this ad campaign to be somewhat early (1 year in advance?!!)... Fall Winter 2011 has yet to arrive and Spring Summer 2012 is still far in sight. But nonetheless, it's always a visual treat to see new creative work inspired by Fashion. Sorry Jessica, I am absolutely digging the car more than you. This new Mercedes Concept A-Class is one ultra sexy piece of engineering! Car enthusiasts... start drooling!