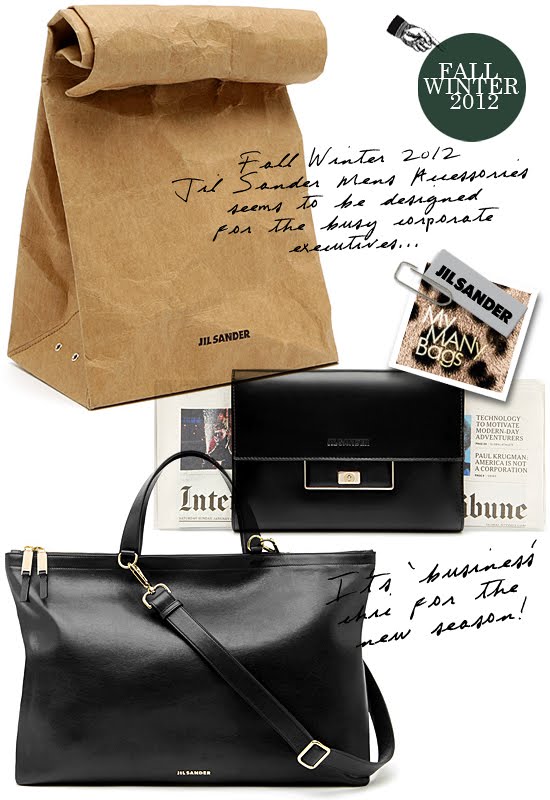 Below: Corporate type shoes given an interesting twist with details like boot soles and acrylic heel... Dressing for the office can be less boring:-) 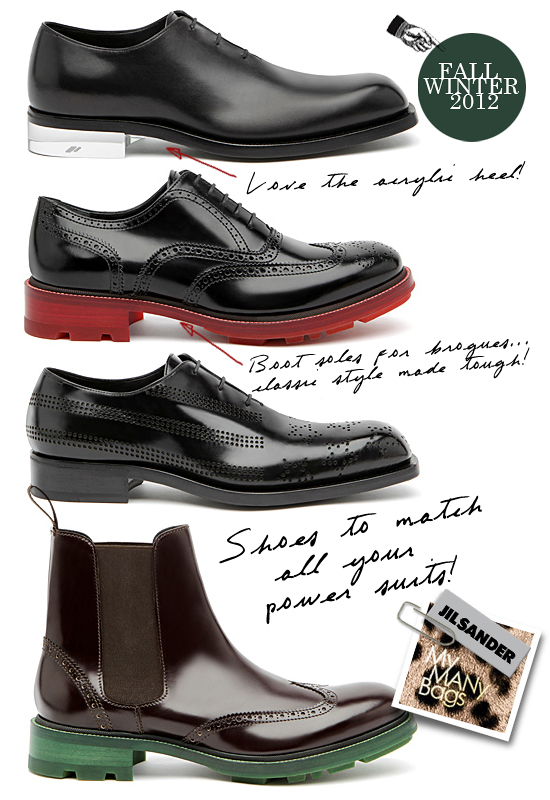 With the Euro debt crisis looming on everyone's minds and the world's economy in shambles, Raf Simons seem to share the same sentiments and his Fall Winter 2012 Mens collection for Jil Sander... his final swan song, echoed these thoughts.

Men of power in the corporate world became his inspiration. Raf Simons sends out a darkly handsome collection of immaculate tailoring with leather heavy themes for their ready to wear. Suiting styles as armor for the modern men of power... those who control the finances of the world. Protection from the woes of the volatile world economy are now paramount, where dollars and cents and balance sheets matter even more.

Seemingly, Jil Sander's Fall Winter 2012 mens accessories match up to those aesthetics. Get ready for 'make believe' lunch bags, austere looking portfolios and boardroom worthy totes for busy executives. Shoes take on a twist with interplay of rugged details such as soles from military boots hybrid with classic brogues. I love the coloured soles which gives a breather to the sombre deep browns and blacks recurring throughout out the collection. Acrylic heels are also an unexpected detail for lace-ups... Raf Simons probably want to say corporate dressing does not have to be dull and stuffy afterall. There can still be some twists to make office life a little more interesting:-)

I am interested to see if those 'lunch bags' will be well received... given everyone is tightening their belts anticipating a slowdown in the economy:-P It will be a true test to see if fashion wins the day amidst shrinking budgets...

Love the shoe with the red sole! But the bags...NO!