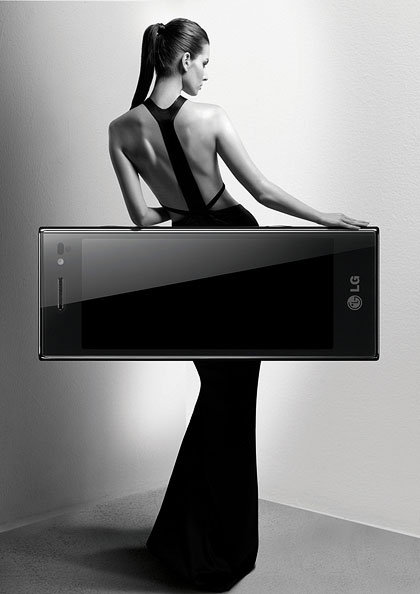 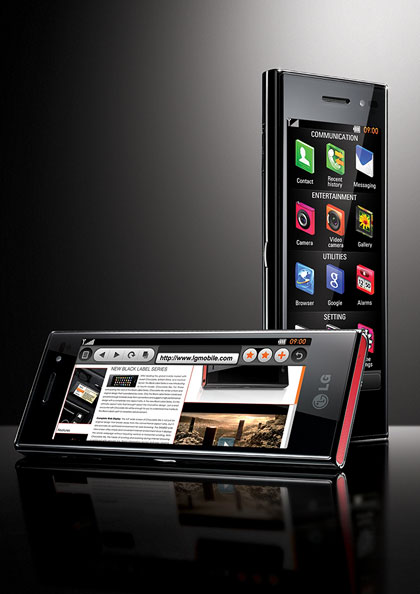 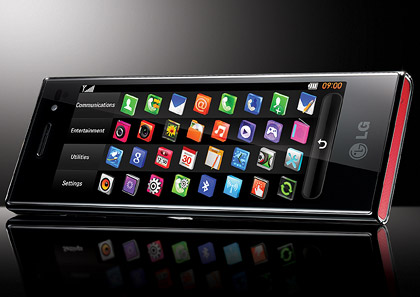 The Supermodel Of Phones...LG's New Chocolate

Innovation and design have always been synonymous with LG. Having partnered Prada for one of the first generation of touch screen phones, LG have always pushed design innovations and won rave reviews from fans and critics alike for form and function in their designs.

So what's next to look out for from LG? It's none other than the new LG Chocolate phone. Aptly dubbed the Supermodel of phones, it's slim design and sexy black colour (accented by red), with a 4-inch wide touch screen is sure to win envious gaze from onlookers. If editors and stylist from top fashion magazines, such as GQ, Vogue and Esquire all approve of this new LG addition, what reasons not to for fashion enthusiasts everywhere?:-P Dress head to toe in your designer gigs and flash the new Chocolate phone to stay at the forefront of the trendy and technologically savvy fashion pack. Get ready to be seduced by the new LG Chocolate:-P

Here's the press release I got from LG:

Singapore, 20 August 2009 - LG Electronics (LG), a global leader and technology innovator in mobile communications, revealed today that style commentators of Vogue, GQ, ELLE, Esquire and Wallpaper* are unanimous in their praise of the new LG Chocolate phone, which they claim evokes the imagery of a breathtakingly svelte supermodel.

At the forefront of the feedback from the fashion experts was the Chocolate’s attractive new shape. The panel of global fashion/lifestyle influencers was glowing in its appraisal of the phone’s beauty, which houses an impressive array of new features such as its 4-inch wide screen and superior functions. The new features highlight LG’s commitment towards innovative designs, as well as the use of new materials, user interfaces and technologies.

Quotes from the fashion editors of top global fashion magazines:

For GQ’s Dylan Jones, the new LG Chocolate proved particularly alluring when he described it as “glossy, chic and thin like a supermodel.” He added, “Its distinctive ratio is a genuine innovation. It has taken conventional mobile design in a new direction. It doesn't even feel like a phone at all.”

“Initially I was simultaneously seduced and baffled by the purity of the Chocolate’s shape and its incredibly glossy black screen,” said Mansel Fletcher, Style Editor at Esquire. “With design panache, the new Chocolate looks perfect, striking in an understated way.”

“It looks rather like a chic, Art Deco cigarette case,” commented Charlotte Sinclaire, Commissioning Editor at Vogue. “I suppressed a sigh of joy when I first laid eyes on its stunning body. It offers the iPhone some pretty stiff competition. I think I’ve been seduced.”

“An elegant, slightly mysterious modernist sculpture, the new LG Chocolate caused gasps of envy from my fellow diners.” said Tony Chambers, Editor-in-Chief of Wallpaper*. “When ‘sleeping’, the blacked-out LG has the allure of secret service man’s limousine, but when woken, the graphic icons are bright, clear and legible.”

Marissa Bourke, Creative Editor at ELLE was also effusive in her praise of the new Chocolate. “It’s a super chic piece of design that redefines the meaning of discreet luxury. The stimulating wide design scores 10 out of 10 for looks and it feels great in the hand. It’s a must have.”

I really support LG Phones! I hope to be able to upgrade my LG Secret to a better LG phone, someday! :)

It's s slim and sleek, and looks wonderfully enabled with state of the art technology.:-P